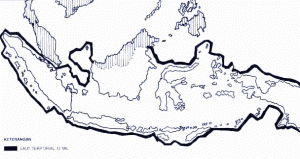 Today, 63 year ago, Prime Minister Indonesia, Mr. Djuanda, declared unilaterally the use of archipelagic baselines, for joining the outmost islands. The waters enclosed was then declared as internal waters (Deklarasi Djuanda 1957).
Most States protested the declaration as it was in breach of the law of the sea at that time. Such baselines also converted high seas within the Country into internal waters thus invited strong objection from maritime powers having strategic military interest.
Indonesia was not comfortable with the label of ‘breaker of international law”, and stood up for its defences by fighting for recognition in the UNCLOS making conferences. Indonesia was neither silent and nor keep it unresolved, but ready to talk and compromise.
A prominent international law scholar, Mochtar Kusumaatmadja,translated the declaration into a legal narrative,using the language of international law, thus understood by maritime lawyers. Then skillfull Diplomats i.a. Hasjim Djalal brought the texts to the diplomatic table.
Mochtar explained behind the unilateral Declaration: Indonesia has to ensure and safeguard its national and political unity as well as its territorial integrity, the very viability of Indonesia as a nation. He emphasized: seas shall connects instead of separate its islands
In the same time, 'on the other side of the coin’, Mochtar ensured the responsibility of Indonesia toward the interest of international community, thus ready to a ‘quid pro quo’ approach for the making of archipelagic regime in the UNCLOS Conferences.
At the earliest stage of Conferences, Indonesia together with Fiji,Mauritius and the Philippines, submitted draft principles and articles on archipelagic state. It offered a clear legal definition about archipelagic states as well as rights and obligations of states therein
Through ‘quid pro quo’ and painstakingly negotiations, the proposal was adopted in UNCLOS 1982 as a "package deal", thus allowing Indonesia to retain its archipelagic baselines and, on the other hand, take into account the interest of other states in the waters enclosed.
Since then, the label of Indonesia as 'breaking international law' has been removed. Indonesia is making instead of breaking the law. As a responsible Sate, despite starting with a 'unilateral', Indonesia then pursued peacefully through legal forums to make it ‘universal’.
It is to demonstrate that Indonesia is an 'international law-friendly" state. Indonesia used and went through international law instead of use of force to gain and protect its national survival. "Selamat Hari Nusantara".